Take a Look at these crosswalks

21 Street in Downtown Saskatoon is Changing

We spent some time with Henry Lau with the City of Saskatoon as he explained about the numerous improvements along 21st Street. You can’t help but get excited when you are with Henry and hear his passion about this project. 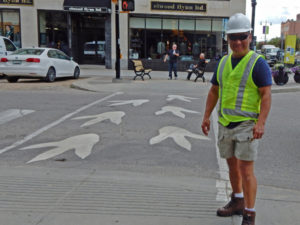 Henry at the T-Rex crossing

Lafrentz provided material and expertise to Henry and his crew as they placed some of the most creative crosswalk treatments we have seen. See them pictured below. The crosswalks are a small portion of the changes and upgrades along 21 Street. If you are in Saskatoon you should check it out.

Lafrentz Road Marking as a part of Canadain Road Builders responds to the COVID-19...

3D Crosswalks in the News

3D Crosswalks to be installed. For the past few years we have been following the information...